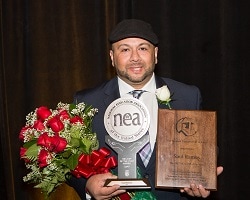 ​
“NEA applauds Saul and his commitment to helping students succeed in the classroom, in school and in the community,” said NEA President Lily Eskelsen García. “He is a shining example of the ESP who work tirelessly to make great public schools for every student.”
Approximately 2.8 million school support staff work in the nation’s public school systems, with more than 75 percent living in the school communities in which they work. Ramos is a long-time advocate for students and a mentor to ESP new to the profession.


“When I first walked into a classroom 18 years ago, never in my wildest dreams did I think I would be recognized for the work I am so passionate about,” said Ramos, who works at Burncoat High School in Worcester, Mass. “Having that first encounter with my first students, and seeing the difference I can make in their lives, made me realize that this is my mission in life.”

As 2017 ESP of the Year, Ramos will represent NEA and ESP at national education conferences, media events, and other community occasions. He also will deliver a speech this summer at the NEA Representative Assembly in Boston.


“However, we know our work is far from complete and we must prepare ourselves and be ready to tackle the real challenges ahead that affect our students, schools, careers, and communities,” she continued. “I know Saul will be a tireless leader for our students, our schools and our ESP in the face of those challenges.”
2016 ESP of the Year Doreen McGuire-Grigg
Speaking at NEA RA in Washington DC.
"We Are the Secret Weapons in School and Student Success"
NEA Education Support Professional  of the Year Doreen McGuire-Grigg, a special education paraeducator in California, took to the stage on July 5 to address nearly 7,000 of her colleagues during NEA’s 2016 Representative Assembly in Washington D.C. Watch video below.
White House Honors Education Support Professional “Champions”
Read article HERE